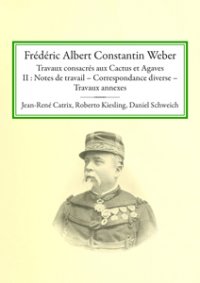 Frédéric Albert Constantin Weber (1830-1903) was a military physician, who participated in several expeditions or campaigns in foreign countries (Algeria, Italy, China, Cochinchina) where he collected various plants, some of therapeutic value. However, his main collection work was done in Mexico, from 1864 to 1867, on the occasion of the Second French Intervention in Mexico where he definitely specialized in Cacti and Agaves. Initially, botany was certainly a hobby, but it became like a second job although Weber never had a greenhouse owing to his frequent reassignements. As a consequence, he established contacts with many botanists and enthusiasts. The botanists (Engelmann, Schumann, Bois…) recognized in Weber a very prolific and clever self-made botanist, and the enthusiasts (Schlumberger, Roland-Gosselin, Schickendantz, Rebut…) helped him a lot.

The first volume (404 pages long) of the compilation presents Weber's publications1) and his correspondence with Georges Engelmann2). The articles are facsimile with an OCRed sublayer; the correspondence is made of letter transcriptions and links to high definition images of the handwritten pages.
The second volume (188 pages) gives personal notes, letters received from or sent to various correspondents, and some other works.

1)
Plus 2 posthumous articles and one based on a letter to Doûmet-Adanson.
2)
Plus a letter sent to Hoppenstedt and one to Poselger.
en/catrixkieslingschweich.txt · Dernière modification: 2020/06/28 10:14 de lobivia